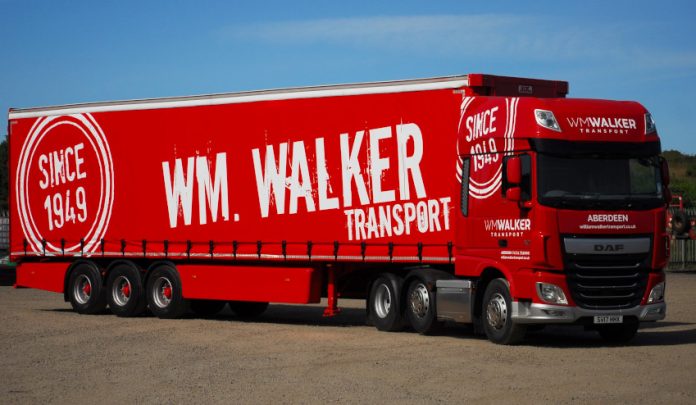 AN ABERDEEN-based haulage supplier is expanding its services to the North of England following £600,000 of funding from HSBC UK.

Third-generation family firm William Walker Transport will use an invoice finance facility from HSBC UK to increase its fleet by adding two new vehicles to its existing 20 tractor units and 30 trailers. The financial support will also enable the company to make its vehicles run more efficiently by modernising and upgrading its trailers, exploring greener fuel sources and lowering its overall carbon emissions.

The firm, which dates back to 1949, currently employs 22 people from its base in Bridge of Don. William Walker Transport primarily serves the North East of Scotland but has seen demand for its services in the North of England, particularly Yorkshire and Lancashire. To support this increase in demand, the business also has plans to add a new driver to its team in early 2020.

“Over the past few years, more and more of our business is generated from the North of England. HSBC UK’s support means we can better service that area with new and more efficient vehicles being added to our fleet. HSBC UK has been supportive of our growth plans and its forward-thinking team has provided us with modern financial management procedures to work with which has also made a huge difference to us.”

“We’re delighted to be able to support the continued growth of this successful family business to extend services south of the border by providing a facility to invest in new and more efficient vehicles. We’re also pleased to be helping businesses such as William Walker to improve their carbon emissions and become more environmentally friendly.”

NEW funding of £750,000 will help the NUS Scotland and more than 30 student associations to provide vital welfare support for students...
Read more

AN ABERDEEN-based haulage supplier is expanding its services to the North of England following £600,000 of funding from HSBC UK.
Read more
Construction

AN ABERDEEN-based haulage supplier is expanding its services to the North of England following £600,000 of funding from HSBC UK.
Read more